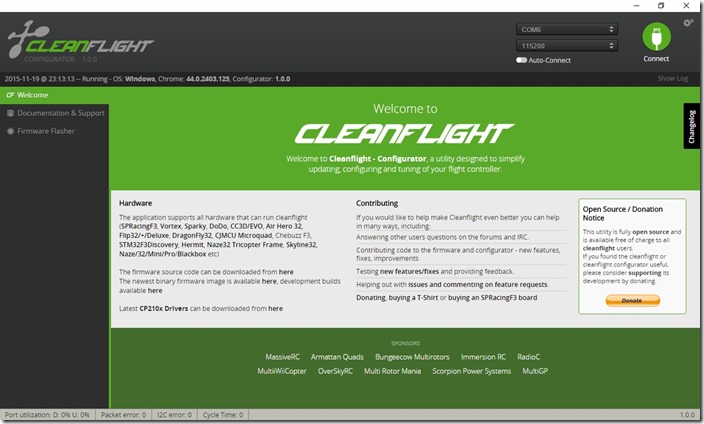 As Cleanflight firmware is getting popular among the multirotor pilots, I wanted to make a summary of the flight controllers that can use it. The question is not anymore “Naze32 vs. CC3D”.

First I will list the F1 controllers, than F3 and at the end the F4 flight controllers. I will put my comments to the boards, that have some additional features, but this is just my personal opinion.

F3 flight controllers have a bit advantage over F1: the STM32 F3 MCU has integrated FPU (floating point unit) and because of this a better performance. I ordered a SPRacingF3 clone, as the price is one third of the official board. Note that Banggood is not giving a single penny to Dominic Clifton and his work on the Cleanflight firmware. So if you decide to order a board not from a official retailer, definitely make a donation to him.

F4 boards have some more processing power and will be good for feature firmware development. Both Sparky2 and OpenPilot Revo have great specifications. As far as I know, the OpenPilot Revo is hard to find on the official webstore and the project is shut down. Overall the Sparky2 seems to be the best flight controller for Cleanflight at the moment.

Update 05.11.2016: The new Airbot /Flip F4 flight controller is based on the Revo design and can be powered directly from the LiPo battery without additional BEC, which makes it my favourite at the moment. Also on all F4 based flight controllers you are now able to install rapidly evolving new forks of Cleanflight, like Betaflight and Raceflight.

Update 10.2017: As of October 2017 the most popular flight controller firmware is Betaflight. This firmware based on the previous Cleanflight code got more and more developed and have a lot of new futures. Check out the current Top 5 flight controllers for it.

Thank you for reading! Follow DroneHiTech on Facebook and stay tuned for more drone news, reviews and tutorials.