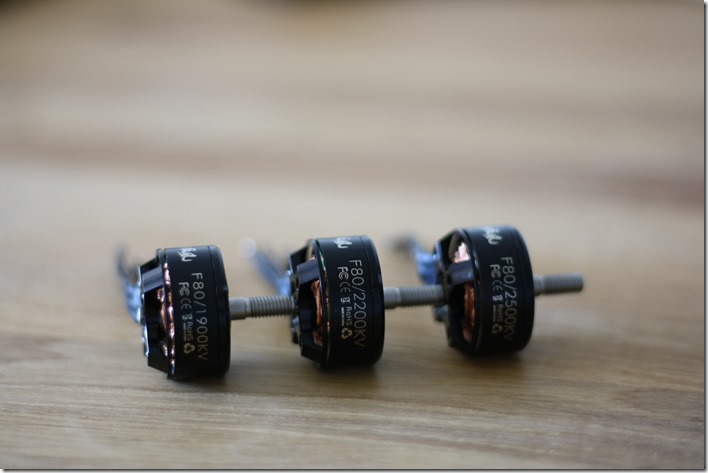 If you are looking for motors for your next race drone, you probably already heard about the F-Series motors by T-Motor. We have tested the F20, F40 and F60 already and thanks to T-Motor finally got our hands on the new F80 motors. We are going to make some thrust tests and compare the F80 to the F40 and F60, so you can find the best one for your race drone.

The F80 is a 2308 type motor and so the biggest and heaviest motor in the F-Series. The build quality is as always great and we haven´t experienced any issues with broken shafts etc. The wires are long enough for any 250mm race quad and T-Motor used 18AWG wires. 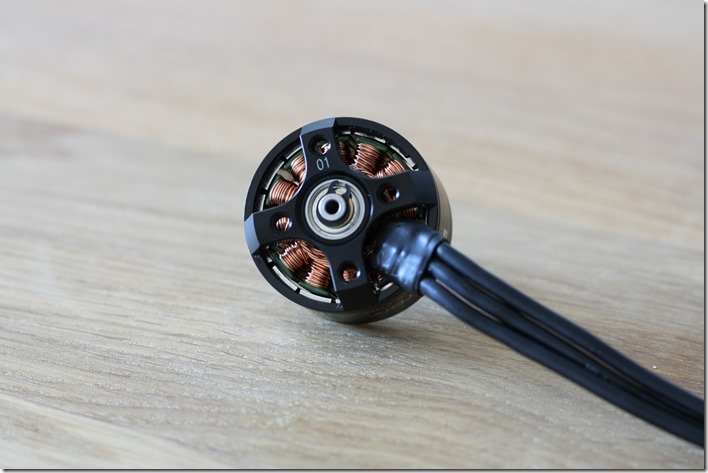 The design isn’t changed a lot compared to the F40II motor, but the F80 features arc magnets. The hollow steel shaft has a diameter of 5mm. Mounting holes pattern is M3 19x16mm.

On all motor thrust tests, we have used three different propeller types: KingKong 6×4, HQ5040 3-blade Skitzo and HQ5045 3-blade. For the 4S LiPo tests, we used our best performing Aikon SEMF 30A ESC and for the 6S LiPo tests the new 6S version of the Aikon. 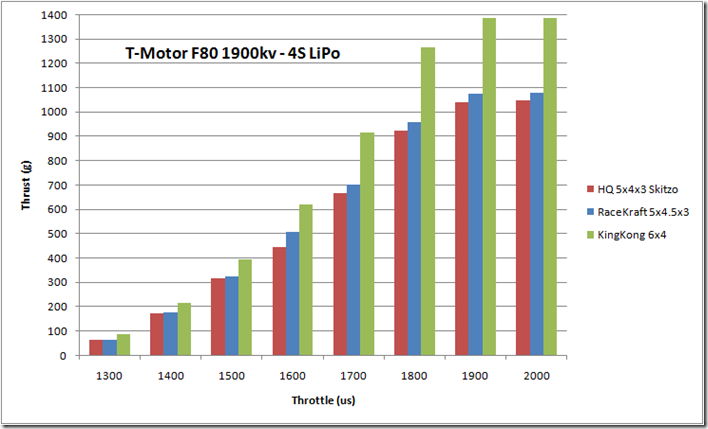 The 1900kv version of the F80 is great for a 6” prop. You will not only get the best thrust result (almost 1.4kg), but also the best efficiency – 2.85g/W. The motor is absolutely cool at the end of the test, so you should no worries of burning it. 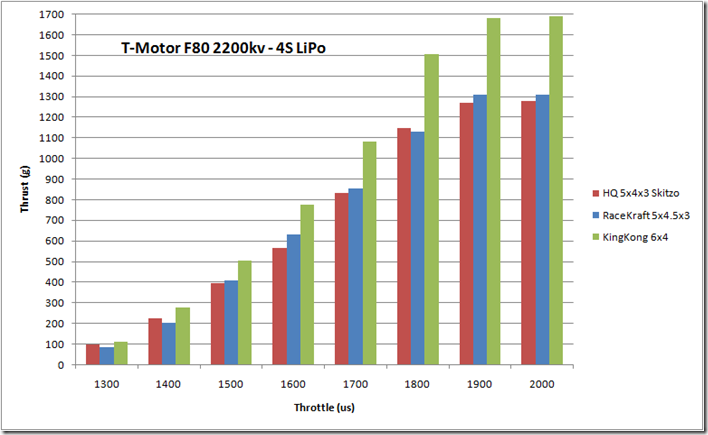 The F80 got warm after the static thrust test with the KingKong 6×4 propeller, but it shouldn’t be a problem in flight. You may be concerned about you ESC and battery because the current reached 42A. Using the 5” propeller it was around 32-35A, which is fine for every 30A rated ESC. 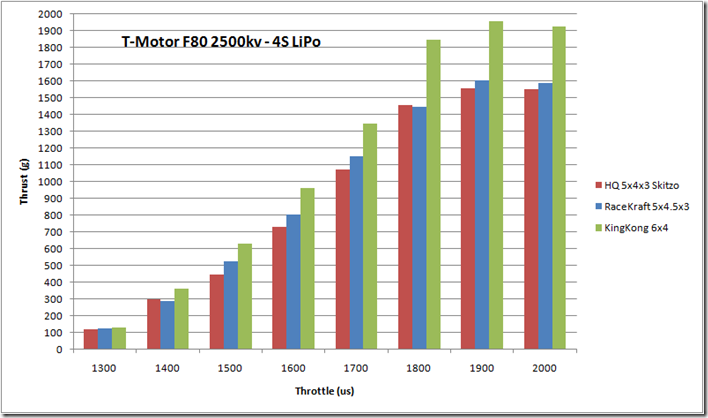 The F80 2500kv (and the Aikon ESC) got very hot after the test! Because of the voltage drop on my battery (16.000mAh 4S), we couldn’t reach the 2kg thrust line. The current popped up to 58A. No battery at the moment can´t handle over 200A current on mini-drone

Now let examine the results with a 6S 1300mAh Nano-Tech battery. We have only used the popular Skitzo HQ5040 3-blade prop. 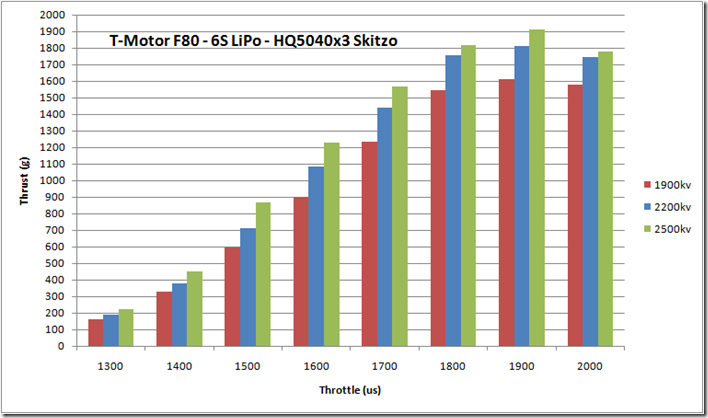 First of all do not wonder why the thrust on max throttle is lower than on 1900us: battery voltage drop. During the test with the 2500kv version, the current reached 55A and voltage dropped to 18V, which almost killed my 6S battery.

We compared the results from the F60 and F80 2200kv version and also deducted the difference in the weight of both motors, so the data is more accurate. Here is the result: 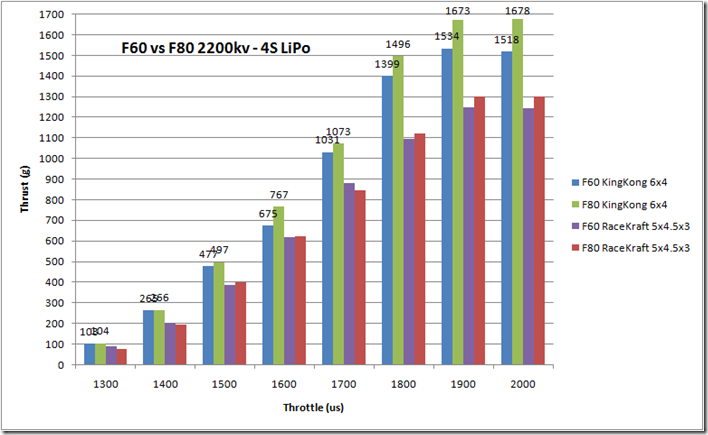 If you are going to use a 6” propeller, there is really a difference in the thrust ratio. However, on a 3-blade 5” prop there is almost any. If you are interested in more F60 thrust results, check here.

Below you can also find a comparison between the “old” F40 2500kv and F80 2500kv with a standard HQ5045 propeller. The difference in the motors weight was already deducted from the thrust results of the F80. 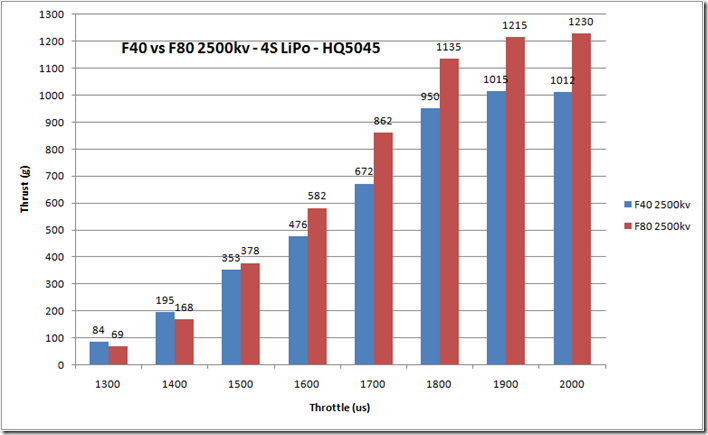 As you can see there is about 200g more thrust with the F80 motor, which will give you a lot more speed. However, the additional weight of 55g (for 4 motors) will decrease the flight time of your drone.

Update: Below you can find the complete exported thrust data from the RCbenchmark Tool.

The F80 motors, as well as all F-Series motors, have great build quality. It is up to you, using the provided test results, to find out which kV-version is the best for your drone. All T-Motors are available at Banggood and are genuine.