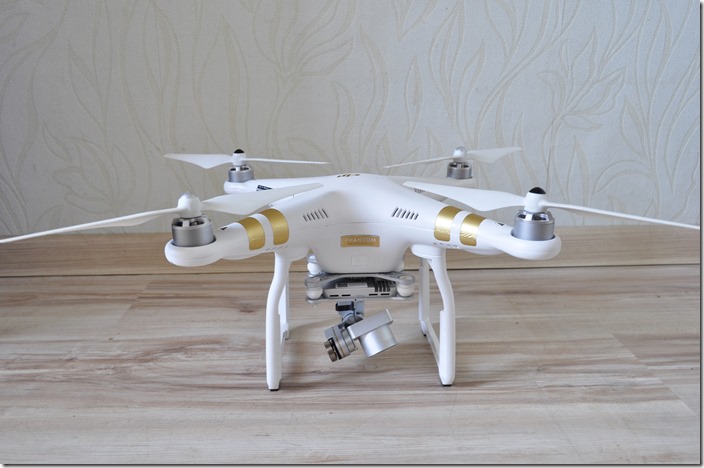 Last week I asked Mariyan, a guy from my home town in Bulgaria, to write a review of his DJI Phantom 3 Professional. He was very kind and has just sent me the Part I of the review. Mariyan is a law student, but uses his Phantom 3 Professional for professional aerial photography, creating 3D models of buildings and agriculture inspecting. Make sure you like his Facebook page and follow him on Instagram for some great aerial photos. I want to thank him for his time and effort writing this review! 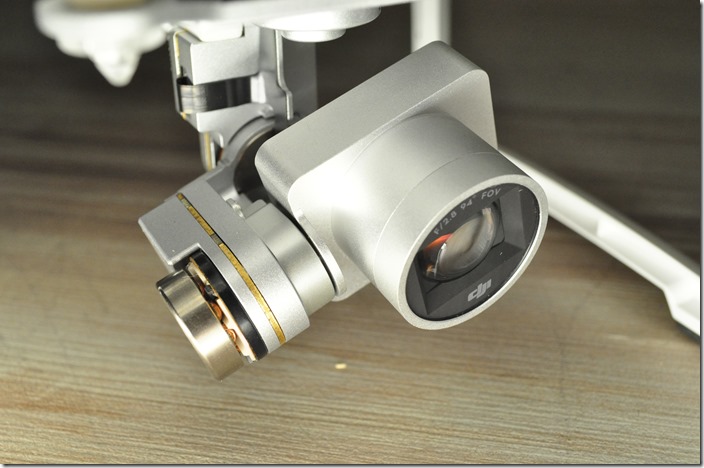 There is Vision Position System (VPS) added next to the gimbal unit which helps the drone to keep position when flying indoor where there is no GPS signal. Pretty much that’s everything and there is not much space to add something else, but as a consumer drone I think this is enough. 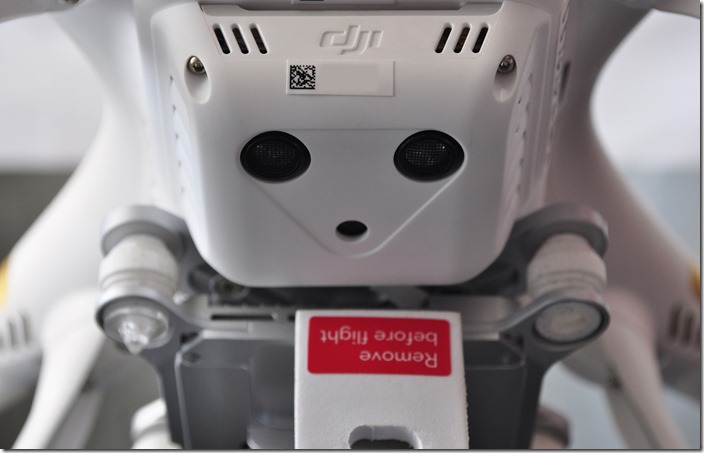 The design of the Phantom 3 hasn’t changed a lot. There is not much visual difference from the older Phantom series. Also the size is almost the same and this is what I like the most about the Phantom series – they are compact and you can get all your drone equipment in one backpack and make the job done. This plus the new capabilities of the Phantom 3 Professional makes it one great tool for aerial photos and videos and also one of the most advanced drones in the market right now.

When you take second look at the Phantom 3 you will see that the landing gear is a bit wider and taller than the old Phantom 2. It’s nice little upgrade as you will see many of the Phantom 2 owners changed the original landing gear with aftermarket one, because the legs get in the camera footage when camera points down, or when making fast moves. Also it’s good for landing, as the narrow landing gear makes it easy for the drone to bend over when landing as it bounces a little before it becomes stationary on the ground.

Another good thing is now the compass is isolated in a plastic box. In front of the legs there are the two Lightbridge antennas. There are new tilted motors with more thrust, smart braking function and new props this time with plastic hubs. Near the gimbal there is the new VPS sensor and the Lightbridge system. The frame is the same plastic one as the first Phantom.

Some people are reporting that they get stress cracks in the plastic near the motors. I’m not sure whether this is design flaw or there is some defective batch of shells, but DJI released second version of the shell which includes wider ventilation opens and reinforced plastic near the motors. For now I don’t have such cracks, I bought my Phantom just after the initial release and currently have around 100 flights some of them in cold weather (-10C), when needed I push full throttle and still not a single crack for now. 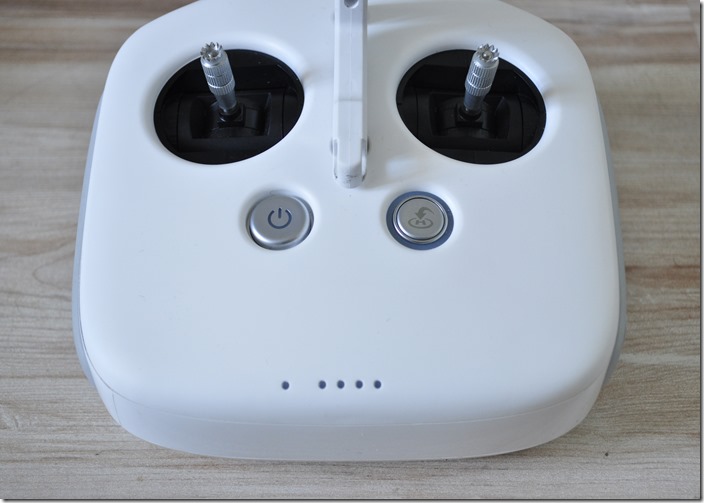 The remote control of the Phantom 3 Professional is completely new. It feels much more ergonomic than the older ones. In reality it’s the same as the Inspire remote, the top finish is just white plastic and there is no HDMI out. But now this is not much of a difference as you can buy separate HDMI module and upgrade your Phantom 3 remote. In the center there is clamp for tablet or phone. On the top there is one knob for the flight modes and 2 rolling buttons one for the exposure and one for the gimbal control, 2 buttons for recording video/taking photo and the 2 antennas for Lightbridge and remote control transmission. 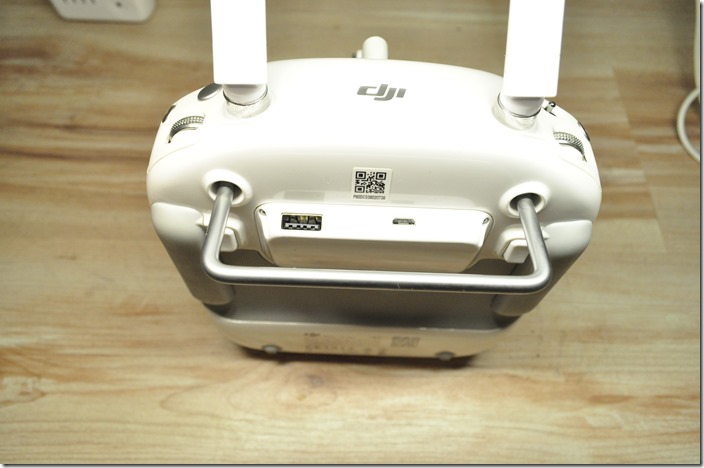 The back of the remote is finished with rubber for a better grip which is great. Also there are 2 buttons free for assigning function from the app. I use them for battery status and gimbal control settings. The output ports behind are USB for the mobile device and mini USB for developer use, but as I said before you can buy the HDMI board from DJI website and upgrade your remote for HDMI out support. In front there are 2 new buttons with LED lighting – the power button and “Return To Home” button. The remote uses built in battery rated at 6000mAh and is enough for at least 10-15 flights. There is also power indicator with 4 LEDs on the bottom.

The best thing about the new remote is the Lightbridge technology which gives you a lot more range and 720p downlink directly to your mobile device in no time (220ms depending on conditions and mobile device). The promised range from DJI is up to 5km in open area, but you risk getting back at 0% battery or not coming back at all if you push it that hard. My longest flight in term of range in open field was 2km from my location and the signal was at 4 bar of 5 total, but for me that range is not so important as I mainly use it for shooting close range things like buildings, estate and commercial videos. In highly populated area with a lot of Wi-Fi networks and other interferences the signal and video downlink is also very good compared to the older Phantom and 5.8Ghz downlink systems.

At first when I bought my Phantom 3 I used Android mobile device which was from the official supported devices (Samsung Galaxy S5), but the DJI Go app wasn’t optimized enough, there were major crashes, video downlink lag/lose. When I started to use the Phantom for commercial work I was forced to buy iPad Mini 2 to be sure that I won’t lose video downlink in the middle of filming. Also 8 inch tablet is far better for framing the shot and using all the settings with no problem touching the wrong button. Now people report that the Android version of the app is way more optimized and the crashes and lags are reduced to minimum. 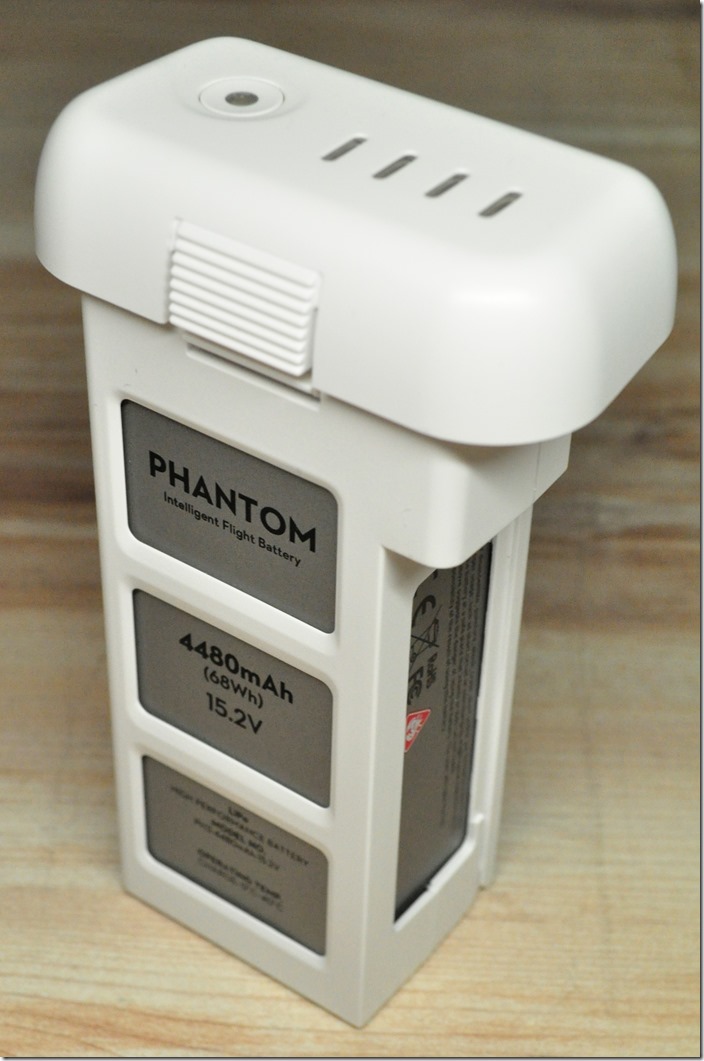 The battery is also intelligent as the old one but they are not interchangeable so you can’t use your Phantom 2 batteries with the Phantom 3. The capacity is lower – 4480 mAh (vs 5200 mAh), but this time the battery uses 4 cells (4S). But don’t let that fool you with Phantom 3 you can get flight times up to 23 minutes depending on the circumstances and with Phantom 2 with gimbal, camera and video downlink people report flight times from 16 to 20 minutes max. So lower capacity don’t means shorter flight times.

In my flights I fly most of the times 10 to 15 minutes as I don’t want to stress the battery way too much. There were times I landed at 15% battery with 18-19 minutes of flight time. But I prefer to land near the 30% spot. There is detailed status for the battery life, charging capacity and voltage of every cell, you can also display the lowest cell voltage on the main screen to monitor battery while flying. With the 100W Professional charger the battery charges in about 1 hour and 10 minutes. 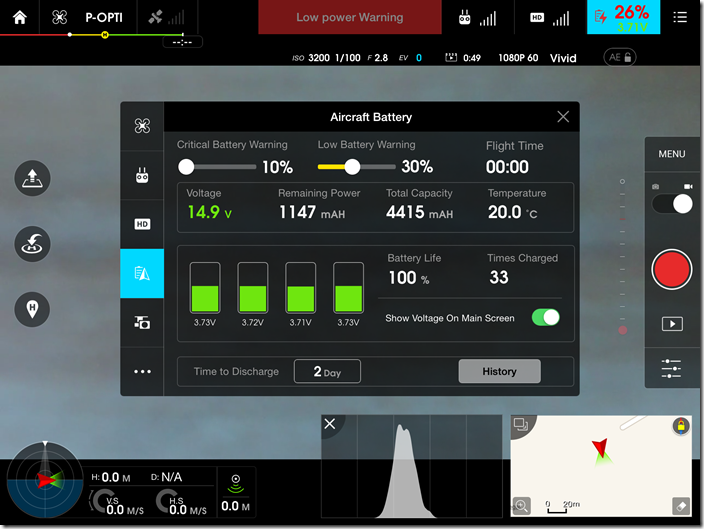 There is storage function for the battery when not used to self-discharge to 35-40%. You can set the days not used to start storage mode in the DJI Go App. I use 1 day, as I know from many sources that the LiPo batteries don’t like to stay at 100% for more days. So if I plan to fly and there is some bad weather or other problems and my batteries are charged and ready after 1 day they will start discharge themselves to reach storage voltage and that way prolong their life. People suggest for first 10 charges to land at 40-50% to not stress the battery. DJI suggests after every 20 charges to fully discharge the battery <8% when you can’t power your drone and then fully charge it to recalibrate it. That way the battery will know exactly how many capacity has left over. For me it’s a “double edged knife”. I don’t do that discharge procedure as many people report that they lost battery life after doing it. The app itself will notify you if you need to recalibrate the battery. You can monitor your battery life through the app in the battery status. Currently my batteries are at 100% battery life with 30+ charges.

In Part II of his DJI Phantom 3 review Mariyan is going to tell you a bit more more about the firmware, flight modes and the DJI Go App. Subscribe to my Facebook page to be notified.