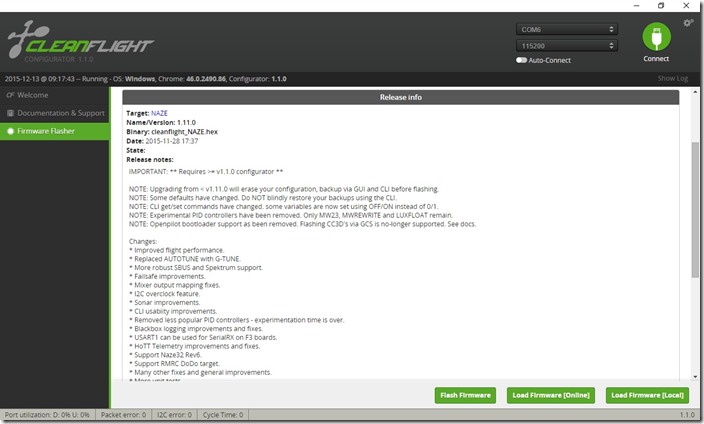 I have been using the Cleanflight 1.11 RC1 since two weeks on my CC3D and it performs great on my acro quad. Today the final / stable version of 1.11 was released and I wanted to mention some of the interesting changes. Here they are:

Probably the most important is that the new Naze32 rev6 is now officially supported.

For the CC3D guys, like me, there is no more the possibility to  flash the Cleanflight firmware via the OpenPilot GCS. So you need to do it with your Arduino board.

You have now the ability to overclock the I2C bus, like in Betaflight, in order to achieve lower loop times. Note that its not relevant for the CC3D flight controller, because it uses the faster SPI bus anyway.

There are only 3 PID controllers left: MW23, MWRewrite and Luxfloat. I think it is a good step in order to make the configuration simple, especially for beginners. Some of the CLI commands have changed, so you should not blindly restore your backups.

These are only the main changes in my opinion, but there are some other improvements and fixes being made. You can check these in your Cleanflight configurator on the “Firmware Flasher” tab. Flash the new Cleanflight 1.11 and go test it. Happy winter flying! … at least in the northern hemisphere 🙂